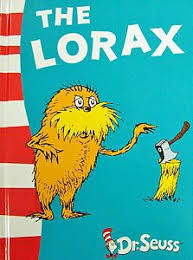 This week saw the first screening (in the UK at least) of Dr Seuss‘ The Lorax, or to be more precise, Universal’s The Lorax. I thoroughly enjoyed the film, which came as a bit of a surprise if I’m honest, because other screen offerings of Dr Seuss’ creations have brought me nothing but disappointment. So how did this one succeed where others have failed?

Well, I think that the superb animation and voice artists had an awful lot to do with it! The animation is beautiful, those vibrantly coloured Truffula trees are quite beautiful and pay homage to the original illustrations:

But, more than the stunning graphics or accurate voice art (I’ve just made that phrase up; I quite like it and will no doubt use it again), is the triumph of the story itself. For me, the key reason why this version works is that whilst there has been a great deal of ‘padding’ to lengthen the tale. the essence of the plot and characterisation has remained intact.

The Lorax himself is a true Eco-warrior, with his sense of justice firmly rooted (pardon the appalling pun) on the side of Mother nature, but without forcing his opinions on others. It is up to the characters and audience/reader to reach their own conclusions about what we should do. The Lorax doesn’t ‘fix’ things for us, he gently steers us in the right direction.

I will admit that the end of the film is perhaps better at selling the moral, because it wraps it all up in a much more overt sense of community spirit than the book does. I am not one of these bookish people who insists that the book is always superior, but I won’t deny that I have never found a book which has been bettered by a screen version. There are some great songs thrown into the mix, which counter-balance the missing rhyme and while these work very well, for me, you can’t beat the rhythmic melody of the text itself.

So, if it came to it, who would win? Dr Seuss or Universal? Tough choice, I think I’m going to abstain on this particular vote.

The independent children's bookshop and tuition centre in the heart of Brentwood, Essex. Owned and run by Mr Frog & Mrs Chicken (happily married book-nerds), with the sole aim of bringing high quality books and tuition to our community. View All Posts