What a magical afternoon we had yesterday! This week marked the second Harry Potter Book Night – technically it was Thursday, but as we tutor after school it made sense to shift our celebrations along to Saturday.

As last year was far busier than anticipated, we asked people to book in this time, so that we could be fully prepared. And oh boy, I’m pleased that we did, as we managed to squeeze in over 40 children plus parents. It was a little warm by the end of the afternoon!

This year the theme was potions and charms, so we decided to create our own potions books. Here’s some of the Hogwarts’ students crafting away,

There were all sorts of potions invented, from invisibility to knowledge. The young wizards and witches took to potions very well.

As well as the books, all of the children were sorted into their Houses, sung the Hogwarts Song and took part in the incredibly difficult quiz. Hats off to Ravenclaw, the winning house this year…it was close though, so let’s see what happens next year.

Mr Frog and I created something rather nifty, so that the children could pose for a crazed photograph. Here are a few suspicious looking characters: 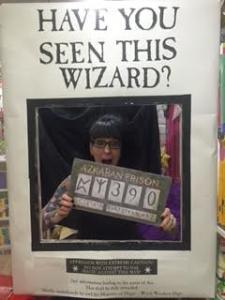 Although Harry Potter Book Night celebrates the books, rather than the films, in honour of Alan Rickman, who will always be Snape, “Always.”

The independent children's bookshop, tuition centre and cafe corner in the heart of Brentwood, Essex. Owned and run by Mr Frog & Mrs Chicken (happily married book-nerds), with the sole aim of bringing high quality books and tuition to our community. View All Posts